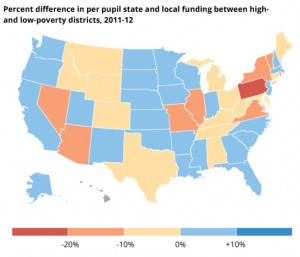 Percent Difference in Per Pupil State and Local Funding between High and Low-Poverty Districts, 2011-12.   Source: National Center for Education Statistics

House Republicans have begun drafting the Student Success Act, a revision to No Child Left Behind. Arne Duncan blasted an early draft saying a funding provision may have a devastating impact on disadvantaged students by giving even more money to well-off school districts at the expense of struggling districts. As reported in The Washington Post:

“Duncan said, about 6.6 million students from low-income families in 23 states are harmed by local and state funding disparities. The funding inequality data comes from National Center for Education Statistics, a branch of the U.S. Department of Education that collects information on schools.

“The point of that money was to supplement, recognizing that poor children, and English language-learners, and students with disabilities come to school with additional challenges,” Duncan told the newspaper. “This is about trying to get additional resources to children and communities who everyone knows need additional help.”

The map above shows where funding inequalities are the worst and shows areas affected by state and local funding differences. Negative percentages indicate that high-poverty schools receive less funding than low-poverty schools.

Mr. Duncan is right to criticize the Student Success Act.  There will be a lot more discussion of this in the months ahead.