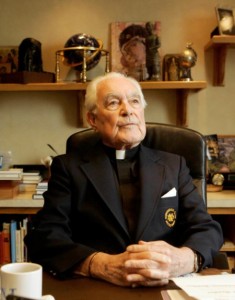 One of the great champions of human rights, the Rev. Theodore Hesburgh died yesterday at the age of 97.  He is best known as the president of Notre Dame University where he served for thirty-five years.  He was an outspoken critic of government and church policies on a number of issues.  He also was am important leader of higher education  He once wrote:

“The Catholic university should be a place where all the great questions are asked, where an exciting conversation is continually in progress, where the mind constantly grows as the values and powers of intelligence and wisdom are cherished and exercised in full freedom.”

The New York Times obituary had this to say:

“The Rev. Theodore M. Hesburgh, the strong-minded former president of the University of Notre Dame who stood up to both the White House and the Vatican as he transformed Catholic higher education in America and raised a powerful moral voice in national affairs, died late Thursday in South Bend, Ind. He was 97.

The university confirmed his death in a statement on its website, saying he had died just before midnight at Holy Cross House, which is next to the university.

As an adviser to presidents, special envoy to popes, theologian, author, educator and activist, Father Hesburgh was for decades considered the most influential priest in America. In 1986, when he retired after a record 35 years as president of Notre Dame, a survey of 485 university presidents named him the most effective college president in the country.

“In his historic service to the nation, the church and the world, he was a steadfast champion for human rights, the cause of peace and care for the poor,” the Rev. John I. Jenkins, Notre Dame’s president, said in a statement.”

I had the pleasure of meeting Rev. Hesburgh once at a conference in the early 1990s.  He had a presence and there was something special about him.