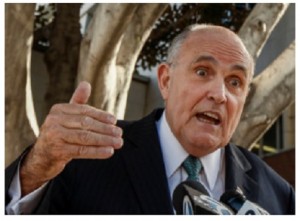 Earlier this week Rudy Giuliani made the TV rounds to talk about the uproar he caused by claiming that President Obama doesn’t love America.  Giuliani did not apologize or explain that he had misspoken. Those of us in New York who have seen Giuliani’s stubbornness  when he was mayor were not surprised by his comments.  What is surprising is that he doesn’t realize he is undermining the early phase of the Republican Party’s presidential nomination process.  Even the New York Daily News which has always been friendly to Giuliani had an editorial yesterday lambasting him and comparing him to Donald Trump’s excesses during the 2012 presidential elections. The editorial commented:

“…in the Daily News online and in Saturday’s paper, investigative reporter Wayne Barrett devastated Giuliani’s assertion that Obama harbors ill will for his nation or his fellow Americans in part because he “wasn’t brought up the way you were brought up and I was brought up.”

Barrett reminded [us] that Giuliani’s father did time in Sing Sing for robbing a milkman and served as enforcer for a loan-sharking operation, that Giuliani secured draft deferments to avoid serving in the Vietnam War and that his father and five uncles avoided service in World War II.

We liked much about Giuliani the mayor. He started winning the war against crime; reformed welfare; … championed immigration and gun control and peerlessly led after 9/11.

That leader is no more. He has gone where no Republican had gone before — into a galaxy beyond Donald Trump…”

As a reminder, it was Washington Post columnist, George Will, who commented in 2012:  “what voter is going to vote for him [Mitt Romney] because he is seen with Donald Trump? The cost of appearing with this bloviating ignoramus is obvious it seems to me.”

It will be interesting to see what Republican potential nominee appears with the new bloviating ignoramus, Rudy Giuliani.   Scott Walker maybe!