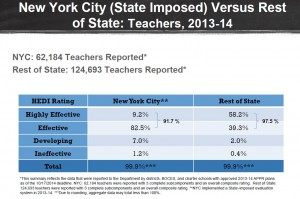 Nine out of 10 New York City teachers received one of the top two rankings in the first year of a new evaluation system that was hailed as a better way of assessing how they perform, according to figures released yesterday by the New York State Education Department. As reported in the New York Times:

“The system, enacted into state law in 2010, was created, in part, to make it easier to identify which teachers performed the best so their methods could be replicated, and which performed the worst, so they could be fired. Although very few teachers in the city were deemed not to be up to standards, state officials and education experts said the city appeared to be doing a better job of evaluating its teachers than the rest of New York State…

Congratulations are in order for New York City teachers, the school principals who guide them,  and the schools of education especially here at City University of New York that trained them.