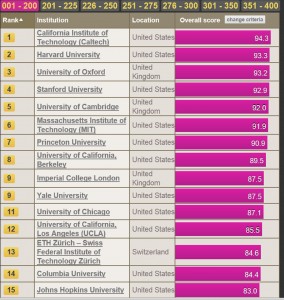 The Times Higher Education World University Rankings 2014-2015 were released on Wednesday and there is good news and not-so-good news for American higher education. The good news is that the US has 7 in the top 10 universities and 74 universities in the top 200. However, these 74 universities are down from 77 last year and some 60 per cent of those institutions rank lower than they did 12 months ago.  The reason for the slippage stems mainly form a decline in funding.

“Western universities, in many cases starved of vital public funding, are losing ground,” said Phil Baty, THE rankings editor, who added that there was “something approaching a crisis” for US state institutions.  Philip Altbach, director of the Center for International Higher Education at Boston College, said that the “serious hit” in funding to the “great American public universities” had major implications for US science and competitiveness.

The United States Education Department and state education department officials should seriously think about the issue of funding raised in these rankings.  Over the past dozen years, a number of states have pretty much abandoned their financial commitment to public higher education.