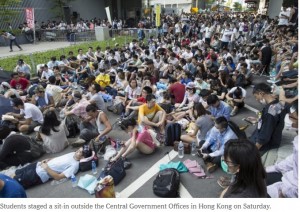 Protests took place in nine cities yesterday as Hong Kong awoke Sunday to the news that the long-awaited disobedience movement, Occupy Central, was officially underway. Occupy Central is making two demands: for the National People’s Congress to retract its decision on Hong Kong’s electoral system made on August 31; and to re-launch the political reform process. The first demand essentially is asking for a more democratic political process in Hong Kong. As reported in the South China Morning Post, Occupy Central commenced following two days of student protests  The New York Times provided the following:

“Since Hong Kong returned to Chinese sovereignty in 1997, the former British colony has kept its independent courts and legal protections for free speech and assembly, as well as a robust civil society. But many democratic groups and politicians say those freedoms have eroded under mainland China’s growing political and economic influence.

The current chief executive, Mr. Leung, has backed Beijing’s plan for electoral changes, which for the first time would let the public vote for the city’s leader, starting in 2017. But critics say the plan includes procedural hurdles that would screen out candidates who do not have Beijing’s implicit blessing, making the popular vote meaningless.

Anger with the Chinese government runs especially deep among Hong Kong residents in their 30s and younger, according to polls. Younger residents feel squeezed by rising housing prices and living expenses and lack of upward mobility, and they often accuse the government of pandering to tycoons.

“I think unfairness is spreading in Hong Kong, and because of the political system,” said Edith Fung, 21, a student of land surveying. “I don’t want Hong Kong to change to be like China, with corruption, unfairness, no press freedom, no religious freedom.”

Ms. Fung said she had been indifferent to politics until this year, and Eva Mo, a nursing student who helped provide first aid to protesters, said she was participating in her first demonstration against the government. “They treated the students like children,” she said. “We only asked for dialogue. But there was none.”