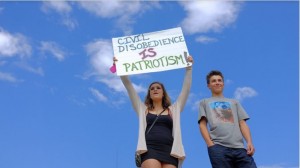 Students, teachers, and parents defied a recently enacted curriculum in Jefferson County, Colorado, that promotes patriotism and guards against educational materials that “encourage or condone civil disorder”.  As reported in the New York Times:

“A new conservative school board majority here in the Denver suburbs recently proposed a curriculum-review committee to promote patriotism, respect for authority and free enterprise and to guard against educational materials that “encourage or condone civil disorder.” In response, hundreds of students, teachers and parents gave the board their own lesson in civil disobedience.

On Tuesday, hundreds of students from high schools across the Jefferson County school district, the second largest in Colorado, streamed out of school and along busy thoroughfares, waving signs and championing the value of learning about the fractious and tumultuous chapters of American history.

“It’s gotten bad,” said Griffin Guttormsson, a junior at Arvada High School who wants to become a teacher and spent the school day soliciting honks from passing cars. “The school board is insane. You can’t erase our history. It’s not patriotic. It’s stupid.”

The teachers’ union, whose members forced two high schools to close Friday by calling in sick, has been in continual conflict with the new board; the board, in turn, has drawn praise from Americans for Prosperity-Colorado, a conservative group affiliated with the Koch family foundations. In April, Dustin Zvonek, the group’s director, wrote in an op-ed that the board’s election was an “exciting and hopeful moment for the county and the school district.”

So far, nothing is settled in Jefferson County. The board put off a discussion of the curriculum-review committee until a meeting in October, and Ken Witt, the board president, suggested that some of its proposed language about not promoting “civil disorder, social strife or disregard of the law” might be cut.

“A lot of those words were more specific and more pointed than they have to be,” Mr. Witt said. He said that the school board was responsible for making decisions about curriculum and that the review committee would give a wider spectrum of parents and community members the power to examine what was taught in schools. He said that some had made censorship allegations “to incite and upset the student population.”

But on Tuesday, those allegations were more than enough to draw hundreds of students into the sun. They waved signs declaring, “It’s world history, not white history,” and talked about Cesar Chavez and the Rev. Dr. Martin Luther King Jr. Leaders of the walkout urged others to stay out of the streets and not to curse, and sympathetic parents brought poster board, magic markers and bottles of water.”

These students have learned their history well. Many of the major political and social movements in this country were initiated by civil disobedience.  Remember the Boston Tea Party!