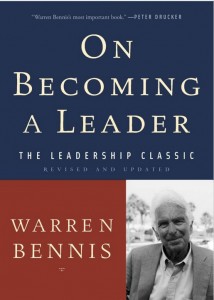 Warren Bennis, one of the leading scholars on leadership and organizations, died yesterday in Los Angeles. Anyone who ever studied leadership regardless of the discipline or perspective would have probably come across one or more of his books or articles. Here is an excerpt from his New York Times obituary:

“Warren Bennis was born in the Bronx on March 8, 1925. He grew up in Westwood, N.J., during the Great Depression. In 1933, his father, a shipping clerk, was fired “with no appeal and no justification,” Professor Bennis recalled in an interview for this obituary in February.

“I was struck at how he was left in a situation where you are helpless, where the next morning you are out of work,” he added. “For the next three or four months, he was loading illegal booze on the Mafia’s trucks to keep food on the table.”

The experience taught him about the power of organizations and their impact on lives. “That will never happen to me,” he recalled thinking. “I will never lose my power to affect my own life.”

In his influential book “On Becoming a Leader,” published in 1989, Professor Bennis wrote that a successful leader must first have a guiding vision of the task or mission to be accomplished and the strength to persist in the face of setbacks, even failure. Another requirement, he said, is “a very particular passion for a vocation, a profession, a course of action.”

“The leader who communicates passion gives hope and inspiration to other people,” he wrote.

Integrity, he said, is imperative: “The leader never lies to himself, especially about himself, knows his flaws as well as his assets, and deals with them directly.”

So, too, are curiosity and daring: “The leader wonders about everything, wants to learn as much as he can, is willing to take risks, experiment, try new things. He does not worry about failure but embraces errors, knowing he will learn from them.”

But Professor Bennis said he found such leadership largely missing in the late 20th century in all quarters of society — in business, politics, academia and the military. In “On Becoming a Leader,” he took aim at corporate leadership, finding it particularly ineffectual and tracing its failings in part to corporate corruption, extravagant executive compensation and an undue emphasis on quarterly earnings over long-term benefits, both for the business itself and society at large.

He worried until recently about what he called a “leadership vacuum” in America, a problem he said was caused to a great extent by a lack of high-quality leadership training at the nation’s business schools.

A dearth of visionary business leaders, he said, meant that companies were being led more by managers of the bottom line than by passionate, independent thinkers who could steer an organization effectively.

“We are at least halfway through the looking glass, on our way to utter chaos,” he wrote in “On Becoming a Leader.” “When the very model of a modern manager becomes C.E.O., he does not become a leader, he becomes a boss, and it is the bosses who have gotten America into its current fix.”

Wise words from a wise leader.  May he rest in peace!