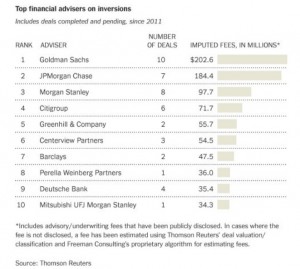 President Obama made waves last week when he called out American companies that practice inversions by setting up operations overseas in order to avoid paying taxes in the United States. President Obama criticized these types of transactions, calling the companies engaged in them “corporate deserters.” “My attitude,” he said, “is I don’t care if it’s legal. It’s wrong.” He has suggested legislation, and Senator Carl Levin, the Michigan Democrat who is chairman of the Senate Permanent Subcommittee on Investigations, has proposed to make it more difficult for an American company to renounce its citizenship — and tax bill — by merging with a smaller foreign competitor.  It turns out the enablers and advisers for these transactions are Wall Street bankers who just a few years ago received billion dollar bailouts from the American people to stabilize their operations.  The New York Times has an article based on information supplied by Thomson Reuters that demonstrates that American banks are reaping huge profits from the inversion transactions.

“So far, on deals completed or pending, Goldman Sachs is estimated to have made $203 million advising on inversion deals since 2011, according to data from the Deal Intelligence unit of Thomson Reuters. JPMorgan stands to collect $185 million, while Morgan Stanley will make $98 million and Citigroup $72 million.

None of the major Wall Street banks, which received help from American taxpayers in the form of hundreds of billions of dollars in loans, appear to have declined on principle to take an assignment from a client seeking to move its corporate citizenship abroad.

“This is an economic game. There are no virgins anywhere,” said Stephen E. Shay, a professor at Harvard Law School and a former deputy assistant Treasury secretary for international tax affairs in the Obama administration. “We can’t look to the banks to stop inversions. They will not look at this based on morality. They will look at it on the basis of fees”

“While an overhaul of the corporate tax system may be the ultimate goal, the gridlock in Washington suggests it is unlikely to come anytime soon. Corporate tax reform is nice in theory, but tough in practice. It most likely requires lower tax rates and the closing of loopholes, which many companies are sure to fight. And whatever new, lower tax rate is determined, there will probably be another country willing to lower its rate further, creating a sad race to zero.

“The dirty secret is that unless the U.S. reduces corporate tax rates to less than 10 percent, a reduction in U.S. tax rates is not likely to have much impact on inversions,” said J. Richard Harvey Jr., a professor at Villanova University School of Law and its Graduate Tax Program. “The reason is that even if the U.S. corporate tax rate were somehow reduced to 15 percent, U.S. multinational companies would still invert if they thought it was to their benefit.”

To be clear, everything the companies and banks that participate in inversion activities is legal. Morally, however, the participants and enablers are corrupt grubbers who hide behind their corporate veneers extolling the bottom lines to their investors.