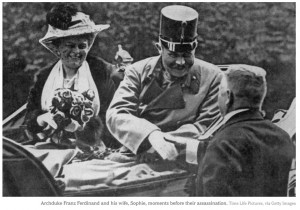 Today is the 100th Anniversary of the assassination of Archduke Franz Ferdinand and his wife, Sophie, that set off World War I on June 28, 1914. The war to end all wars was devastating in terms of casualties and overall destruction. It demolished empires and destroyed kings, kaisers and sultans. It introduced chemical weapons and aerial bombing. The total number of casualties in World War I, both military and civilian, was about 37 million: 16 million deaths and 21 million wounded. The total number of deaths includes 9.7 million military personnel and about 6.8 million civilians. The New York Times has established a website that contains several excellent articles and images of The Great War. It is a grim reminder of the destruction and carnage that man can inflict on his fellow man.