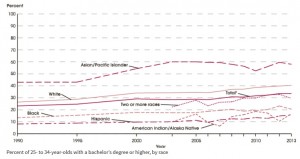 The National Center for Education Statistics released yesterday its annual Condition of Education Report and there is good news in terms of degree attainment but not such good news for blacks and Latinos. As reported in The Chronicle of Higher Education:

“The Education Department’s National Center for Education Statistics released its enormous annual report on the state of education in the United States. “The Condition of Education 2014” is based on 42 national indicators, from preschool enrollment to degree attainment to labor-force participation.
The report doesn’t draw any conclusions, but …the report offers a fairly comprehensive snapshot of both trends and the current state of the education landscape. For example:

The total percentage of 25- to 29-year-olds with at least a bachelor’s degree rose to 34 percent in 2013, from 23 percent in 1990. That might not sound like a lot, but the United States is still above average in terms of educational attainment, compared with other developed countries.
In 2011, 33 percent of Americans age 25 to 34 had at least a bachelor’s degree, compared with an average of 29.5 percent among all countries in the Organization for Economic Cooperation and Development. That ranks the United States 12th in postsecondary educational attainment among the 34-member group of developed countries.

In sum, American higher education continues to progress and move forward but more so for whites and Asians than blacks and Latinos.