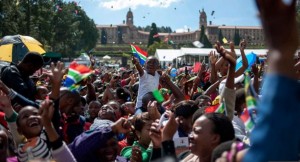 It is hard to believe that twenty years have passed since the demise of apartheid in South Africa.  Yesterday there were celebrations with songs, prayers and praise for those who guided their country into a more peaceful, tolerant era and an end to white rule on April 27, 1994.  As reported in The Huffington Post:

“The focus of the Freedom Day commemorations was in Pretoria at the Union Buildings, the century-old government offices where President Jacob Zuma and dignitaries, including foreign diplomats, gathered to reflect on the long struggle against apartheid and ensuing efforts to build a better country.

The anniversary precedes elections on May 7 that are likely to see the ruling African National Congress return to power with a smaller majority, reflecting discontent with the movement that opposed white domination before its candidate, Nelson Mandela, became South Africa’s first black president.

In a speech, Zuma said South Africa had a good story to tell, referring to its stable electoral system, its constitutional commitment to human rights as well as advancements in health care, welfare grants and water and electricity in the past 20 years. Close to 3 million houses have been built since 1994, women play a far more prominent role in public life, and crime has declined, even it remains an issue of “serious concern,” he said.

“We must not deny or downplay these achievements, regardless of our political differences or contestation at any given time, including the election period.” said Zuma…”

…The mood was festive at the Pretoria ceremony, where balloons were on display and many people waved small South African flags. Women ululated and the crowd sang the national anthem, which incorporates several of South Africa’s official languages in a show of unity. Some spectators wore African National Congress T-shirts, and danced the so-called “Freedom Dance,” which features a raised fist associated with Mandela’s show of defiance when he was freed in 1990 after 27 years in jail during apartheid.”