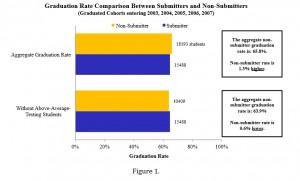 In a recently published study Defining promise: optional standardized testing policies in American college and university admissions, Bill Hiss and Valerie Franks conclude that there are few significant differences in either average GPA or graduation rate that correlate with submission or non-submission of standardized test scores (STS) during the admissions process.

Comparisons of aggregate numbers for students from 33 public and private colleges and universities followed over 8 cohort years showed the cumulative GPA for STS submitters versus non submitters differed by 0.05 (2.83 vs. 2.88, respectively).  Graduation rates for submitters were only 0.6% higher than those of non-submitters.

We can speculate as to why these tests are really are not good predictors.  The tests do not measure intangible qualities such as persistence, creativity, and organization skills.  They also are timed tests which have little meaning except to measure an applicant’s test-taking speed.