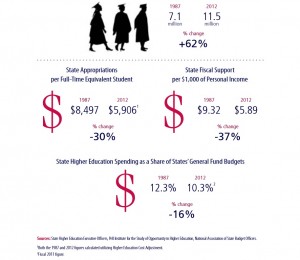 Earlier this week, the American Association of State Colleges and Universities issued a report entitled, A Proposed Federal Matching Program to Stop the Privatization of Public Higher Education by Daniel J. Hurley, Thomas L. Harnisch and Barmak Nassirian, that recommends a new federal block grant program to the states for higher education. The goal of the proposed program is to give states some incentive to preserve and even raise the amount they spend on colleges, which has been in decline, and also to strengthen the federal commitment to affordable higher education.  As per the graphic above, state funding per full-time equivalent students decreased 30 percent between 1987 and 2012.  The report recommends:

This would be a real boon for public higher education but unfortunately matching block grants have not been the style in Washington, D.C. in recent decades and surely not during the Obama administration.