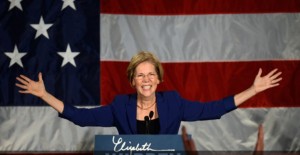 Following on the heels of an article in the New Republic on the speculation of Elizabeth Warren challenging Hilary Clinton for the Democratic presidential nomination, The Huffington Post had a headline today that there are three words that strike terror in the hearts of Wall Street bankers and corporate executives: “President Elizabeth Warren”.

The anxiety over Warren grew Monday after the New Republic article suggested the bank-bashing Democratic senator from Massachusetts could mount a presidential bid in 2016 and would not necessarily defer to Hillary Clinton — who is viewed as far more business-friendly — for the party’s nomination.  As reported in Politico:

“And the fear is not only that Warren, who channels an increasingly popular strain of Occupy Wall Street-style anti-corporatism, might win. That is viewed by many political analysts as a slim possibility. It is also that a Warren candidacy, and even the threat of one, would push Clinton to the left in the primaries and revive arguments about breaking up the nation’s largest banks, raising taxes on the wealthy and otherwise stoking populist anger that is likely to also play a big role in the Republican primaries.

A spokesperson for Warren declined to comment on whether she would consider a presidential bid against Clinton, though Warren has previously said she has no plans to run. People close to Warren note that she signed a letter from female Democratic senators urging Clinton to run in 2016. And Warren associates, mindful of any appearance of creating the narrative of a Warren-for-president campaign, have corresponded with Clinton associates to stress that they didn’t fuel the New Republic story by Noam Scheiber.”