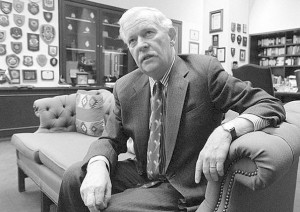 The New York Times reported that Dr. Gerald Lynch, the former president of John Jay College of Criminal Justice,  died at his home on Long Island.  His obituary mentions:

“Dr. Lynch, the college’s longest-serving president, was a psychology professor when he was named acting president of John Jay in 1975. Within weeks, the entire City University of New York system became embroiled in the fiscal crisis, and John Jay’s future was in doubt.

Mayor Abraham D. Beame had ordered the CUNY system to cut nearly $100 million from its budget. One solution proposed by the City University chancellor Robert J. Kibbee involved closing or merging multiple schools, one of them John Jay. The Board of Higher Education — now called the City University of New York Board of Trustees — was ready to go along, but Dr. Lynch opposed the plan.

He enthusiastically supported student protests, even scaling a wooden barricade with a megaphone to lead hundreds of students in chants. He also courted high-profile supporters in politics and law enforcement, including Police Commissioner Michael J. Codd and Nicholas Scoppetta, then the city’s commissioner of investigations and a teacher at John Jay. And he cut nearly $3 million with an austerity budget of his own.

“Even though this is radical surgery,” Dr. Lynch said, “it is better than death.”

For those of us at CUNY during the fiscal crisis, it was a most difficult time.  President Lynch defended his college well and fought the position of the CUNY Board of Higher Education.  John Jay went on to become one of the top schools of criminal justice in the country.