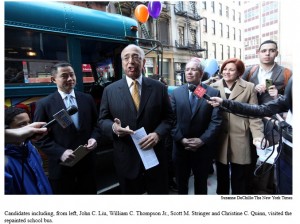 Parents, teachers and community action groups are pooling their energies to influence education policy in New York City by traveling its streets and avenues in a bright, shiny blue school bus.  As reported in the New York Times:

“…the bus will carry the message of a coalition of public school supporters called A+ NYC to New York City’s mayoral candidates, in hope of shaping their positions on the future of the nation’s largest public school system. A+ began its efforts last week by taking the bus on a weeklong tour that zigzagged across the boroughs, stopping at schools, offices of participating advocacy groups, and spots like the Brooklyn Public Library and the Staten Island Ferry terminal.

Visitors to the bus could express support for proposed changes they would like to see in public schools and add their own suggestions. Their responses will be tabulated to create a platform, which a sister group, New Yorkers for Great Public Schools, which includes the United Federation of Teachers, will communicate to candidates and voters…

…A+ NYC leaders said they felt that this election, with the Bloomberg administration coming to an end, may be different. “I think that what we’ve demonstrated is there is real energy and a broad energy around the possibility to line up on education,” said Oona Chatterjee, an associate director of the Annenberg Institute for School Reform, a nonprofit educational research and policy group that helped organize A+ NYC. “

While still evolving, the A+NYC policy platform stresses issues related to equity, a well-rounded curriculum including arts in education, and making sure that all students including English language learners and children with special needs have a chance to succeed.

A+NYC is also an effort to offset corporate-financed groups such as Students First founded by Michelle Rhee, the former Washington schools chancellor, which has earned a reputation as being an anti-teachers-union, and pro-charter-schools. 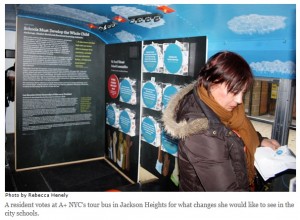