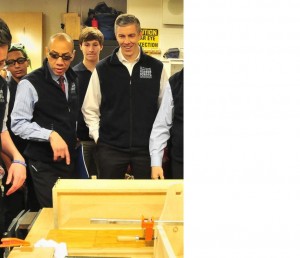 The Daily News had an article yesterday describing the visit of Arne Duncan, along with Schools Chancellor Dennis Walcott and teachers union boss Michael Mulgrew, to the New York Harbor School, which houses 400 students and prepares them for careers in marine biology and robotics. Duncan spoke highly of the campus and the kids, saying that if more schools like this existed, “think of what our graduation rate would be.” Duncan’s visit comes after Obama praised P-TECH (Pathways in Technology Early College High School) in Brooklyn during his State of the Union speech a couple of weeks ago.

The Harbor School, located on Governors Island,  is indeed one of the jewels in the New York City public education system.  One of my former students, Nathan Dudley, who graduated from Hunter College’s Administration and Supervision Program, was the founding principal and visionary for the school. He left his post this past summer to work at the central office.   P-Tech is a joint project of the NYC Department of Education, CUNY and IBM.

Those of us involved in K-12 education in whatever capacity see the positive stories of the Harbor School and P-Tech over and over again and wish there were more of them in New York and cities around the country.  Unfortunately we also see high schools in the poorest areas of the city that were developed in some cases in great haste that do not have any science laboratories so that students in these schools will never have the opportunity to take a hands-on science course.

Regardless we are glad that we are getting it right for some of our students.  We need to work harder to get it right for all of them.