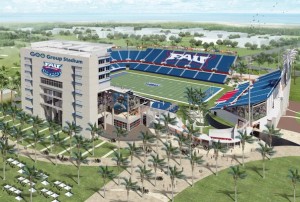 The New York Times has an article on its sports pages today on the naming of Florida Atlantic University’s new football stadium for a company that runs for-profit prisons.  The article comments:

“In recent years, where stadium naming rights could be sold, universities and professional sports teams have sold them — to airlines and banks and companies that sell beer, soda, doughnuts, cars, telecommunications, razors and baseball bats. This led to memorable examples like Enron Field, the KFC Yum! Center and the University of Phoenix Stadium.

On Tuesday, that trend took another strange turn when Florida Atlantic University, in Boca Raton, firmed a deal to rename its football building GEO Group Stadium. Perhaps that pushed stadium naming to its zenith, if only because the GEO Group is a private prison corporation.

For this partnership, there is no obvious precedent.

The university’s president described the deal as “wonderful” and the company as “well run” and by a notable alumnus. But it also left some unsettled, including those who study the business of sports and track the privatization of the prison industry. To those critics, this was a jarring case of the lengths colleges and teams will go to produce revenue, of the way that everything seems to be for sale now in sports — and to anyone with enough cash.

“This is an example of great donor intent, terrible execution,” said Paul Swangard, the managing director at the University of Oregon Warsaw Sports Marketing Center. “Here’s a guy with strong ties to the university, who wants to make a difference, and is mixing his philanthropic interest with a marketing strategy that doesn’t make any sense.”

The GEO Group, which is based in Boca Raton, secured the naming rights with a $6 million gift, paid out over 12 years through its charitable arm, the largest such donation in Florida Atlantic’s athletic history. In a news release, the university said the money would finance athletic operations, the stadium, scholarships and “academic priorities.”