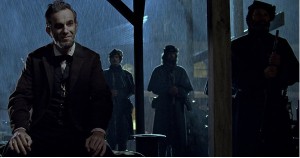 If you are not away visiting family or exhausted shopping and taking advantage of Black Friday sales, you might want to go to the movies this holiday weekend.  Last night I saw Lincoln, the movie based on a  book by Doris Kearns Goodwin, directed by Steven Spielberg and starring Daniel Day-Lewis.

Lincoln centers entirely on the political battle between Abraham Lincoln (a Republican) and the Democrats over the passage of the 13th Amendment that would end slavery in this country.  Set in the closing months of the Civil War,  I found myself riveted as the political intrigue unfurls and historic figures such as Mary Todd Lincoln and Thaddeus Stevens come to life.   It also reminded me of the stark differences in the social positions of the two political parties in the 1860s versus today.   For example, Fernando Wood, a former mayor and a Congressman from New York City is one of the leaders in the Democratic Party’s opposition to the Republican amendment.   As the New York Times review stated:  “Lincoln may be  among the finest films ever made about American politics”.

I also enjoyed the layers of Abraham Lincoln exposed in the film.  We see Lincoln the husband, the father, the story teller (the one about George Washington in a British privy had the audience howling), the statesman, and the wheeler-dealer politician.

Even though we all know the outcome, it is still a fine piece of entertainment filled with history, democracy in action and of course, Abraham Lincoln.