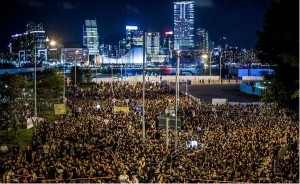 The New York Times is reporting that faced with tens of thousands of protesters contending that a Beijing-backed plan for “moral and national education” amounted to brainwashing and political indoctrination, Hong Kong’s chief executive revoked a 2015 deadline for every school to start teaching it.

“Many protesters were not mollified, demanding that the education plan be withdrawn entirely. Crowds of young people in black T-shirts continued to pour into the plaza and streets around the local government’s headquarters on Saturday evening after Leung Chun-ying, the chief executive, offered the compromise.

Mr. Leung said he wanted each school to decide whether to teach the subject in the coming years, an arrangement that could allow Beijing’s allies to press principals who do not want it.

“We just want to cancel the whole subject,” said Sam Chan, a 19-year-old community college student. “People want to protect our future and our sons’ futures.”

A large but peaceful crowd, estimated at 100,000 by organizers and 27,500 by the police, formed late Saturday evening despite Mr. Leung’s retreat…For the past 10 days, swelling protests against the plan were the latest sign of a new interest in political activism by youths here, and there were some signs that this activism could be spreading in mainland China for the first time since the Tiananmen Square protests in 1989.”

There is a lesson for us here in the United States as our federal government adopts policies such as No Child Left Behind and Race to the Top that attempt to negate the decision making of state and local governing boards of education on matters such as curriculum.