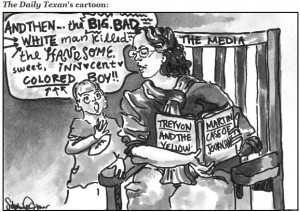 The Hufffington Post is reporting that The Daily Texan, a student newspaper at the University of Texas in Austin, pulled a controversial cartoon about the media coverage of the Trayvon Martin case on Tuesday.

The cartoon critiques the media coverage of Martin’s death, which has become a national episode. A woman reading to a child from a book labeled “Trayvon Martin and the Case of Yellow Journalism” says in a speech bubble “And then, the BIG BAD WHITE man killed the handsome, sweet, innocent colored boy.” It ran in the March 27, 2012 edition of the DT.

The cartoon was done by Stephanie Eisner. Gawker noted the student paper pulled the cartoon from their website on Tuesday afternoon.