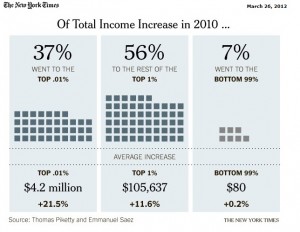 New data show a startling difference between the fortunes of the wealthy and everybody else.  In an op-ed piece in today’s New York Times, Steve Rattner refers to a study that analyzed tax returns.  The results:

“In 2010, as the nation continued to recover from the recession, a dizzying 93 percent of the additional income created in the country that year, compared to 2009 — $288 billion — went to the top 1 percent of taxpayers, those with at least $352,000 in income. That delivered an average single-year pay increase of 11.6 percent to each of these households.

Still more astonishing was the extent to which the super rich got rich faster than the merely rich. In 2010, 37 percent of these additional earnings went to just the top 0.01 percent, a teaspoon-size collection of about 15,000 households with average incomes of $23.8 million. These fortunate few saw their incomes rise by 21.5 percent.

“The only way to redress the income imbalance is by implementing policies that are oriented toward reversing the forces that caused it. That means letting the Bush tax cuts expire for the wealthy and adding money to some of the programs that House Republicans seek to cut. Allowing this disparity to continue is both bad economic policy and bad social policy. We owe those at the bottom a fairer shot at moving up.”