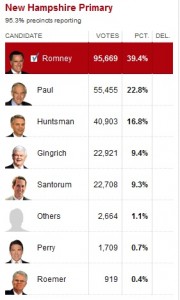 Mitt Romney easily won the New Hampshire primary yesterday but the media and pundits are predicting a more hotly contested if not bloody battle in South Carolina.   Ron Paul and John Huntsman had stronger showings compared to the rest of the field.

“There is no disputing Romney’s position in this primary: it is very strong. But there are a few reasons why there is cause for concern inside Romney world. The most immediate is the onslaught that Romney faces in South Carolina, where for the next 11 days he will be bashed for his career in private equity by Gingrich and Perry, as well as by $3.4 million in TV ads from a super PAC supporting Gingrich. One Romney adviser said the days ahead will be a “bloody mess.”

Gingrich began his onslaught over the past few days, previewing the TV ads set to air in the Palmetto state, which will be supplemented online by a 27-minute film When Mitt Romney Came to Town that lampoons Romney as a “predatory corporate raider” and examines the impact on workers of job loss resulting from takeovers by Bain Capital, Romney’s former company.

Perry and Huntsman drafted in behind the Gingrich attacks over the past two days, igniting a battle royale within the Republican party and the conservative movement over whether it was legitimate to criticize someone for participating in the free-market economy.

The New York Times also has a good analysis of what awaits the candidates in South Carolina.