This week we will be commemorating the first manned flight into space.  On April 12, 1961, the Russian cosmonaut, Yuri Gargarin, made his historic mission on board Vostok I.  Mary Roach in an op-ed piece in the NY Times has some of the human story of the man who became an international hero especially for those of us who were raised on Buck Rogers serials in the 1950s.

Roach portrays him as a rather humble individual who was basically following orders from the Soviet scientists, who controlled every detail of the flight.  He was “a skilled pilot [who was] forbidden to use his skills. The controls of Vostok I were locked; the capsule was maneuvered entirely from the ground”. One of the best lines in this article is a a quote from Gargarin:  “I’m not sure if I was the first man in space or the last dog”.

Gargarin’s flight, preceded by the launch of Sputnik in 1957, set in motion a competition with the Soviet Union, based on achievement and knowledge in science and technology.   This had significant repercussion on the American education system and especially its curricula.  We continue to debate on how to teach and how to attract children to careers in science and  technology. 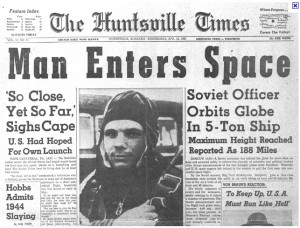